On September 21stand 22nd, the 44thCongress of the European Society of Lymphologytook place in Prague. 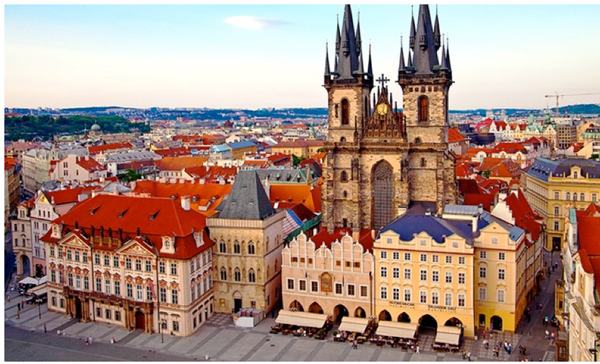 The topics at issue analyzed many of the diagnostic and therapeutic aspects affecting patients with lymphedema and lipedema. A great attendance characterized the sessions on ‘topics not sufficiently discussed so far’, such as Lipedema, psycho-social aspects, with the intervention of Catherine Seo, surgical aspects and the treatment of genital oedema.

Newsin the genetic field concern the importance of the study of family members in the discovery of new genes (more and more frequent the occurrence of new mutations!) that, to be considered responsible for the disease, should necessarily be found mutated also in some kins. When this situation occurs, and the lympho-scintigraphic test performed on the positive family member shows clear signs of lymphatic transport difficulty, two results are achieved: the confirmation of the pathogenic power of the mutation and the need of preventative measures for the family member potentially at risk (at least through a lifestyle that avoids triggering factors).

Particular interest was aroused, in the same session, by the discussion regarding oedemas of the lower limbs in the elderly, frequently misunderstood by both general practitioners and by various specialists. It was highlighted how often cardiologists keep in high consideration the so-called systolic function (contractile capacity of the heart, i.e. ability to push fluids towards the periphery), that very often is normal, (the so-called Ejection fraction – EF – that in the Doppler echocardiogram appears to be within the ranges),but they underestimate a possible diastolic dysfunction (frequent over 65 years of age, especially in women) which is, on the contrary, an expression of inability to fill the cardiac chambers; if it is reduced (and the dosage of PRO-BNP, with a simple blood sampling, testifies this condition), it is responsible for peripheral oedema. In these cases, physical therapy is contraindicated; diuretic therapy should be preferred and, when the patient re-balances, elastic knee-highs must be worn from morning to evening. 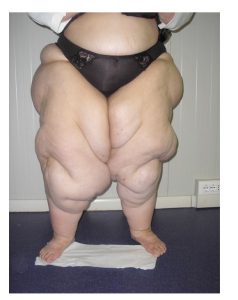 The session on Lipedema emphasized the already known problems regarding common difficulties in diagnosis and therapeutic approach. Catherine Seo underlined the patients’ state of deep frustration, who, in addition to physical discomfort, must face the extreme limitation of therapeutic results, many of which are yet to be verified.

Also the concomitance, frequent in these patients, of thyroid disorders (such as the Hashimoto’s Thyroiditis), disorders of glucose metabolism (tendency to diabetes or resistance to insulin) and problems related to the menstrual cycle involving female hormonal balances were also emphasized (all aspects to be investigated in these types of patients).

In the surgical session various proposals were alternated with reciprocal “cutting remarks” between the supporters of the microsurgical techniques or of the lymph nodal transplant on the one hand, and the supporters of Liposuction on the other. The author of this comment presented a work (which, moreover, was also awarded) on the value and the limits of surgery in primary and secondary lymphedemas; we collected data and evidences of contrasting clinical results: some of them showed good results (especially in the secondary forms) both from the point of view of the reduction of volume and consistency of limbs and of the reduction of lymphangitic episodes; other cases with almost no result at all; and cases (in which the surgical indication was wrong from the beginning, as for example in an inguinal lymphangitis or in a pure lipedema) that even showed a ‘iatrogenic’ worsening of the overall clinical picture.

Following the contribution of various opinion leaders, the conclusion was that the cases proposed to surgery must be more carefully selected and framed in order to avoid subjecting them to interventions (with general or local anaesthesia) that may result in possible therapeutic failures.

During the Congress, Oldrich Eliska was awarded (by the president of the Congress Martin Wald) an honorary prize for having particularly stood out at national level in the study of Lymphology.

The oedema of external genitalia, difficult to manage both in males and in females, finds, equally committed on two fronts, surgeons (with the reduction of tissues and plastic reconstruction) and physiotherapists, with the application of manual treatments, cohesive bandages having undoubted effectiveness, up to the design of definitive elastic garments (condom type for penile oedemas, along with the elastic garments that are normally used for the amputees’ stumps for scrotal oedemas).

Great attendance, as usual, also thanks to a massive presence of the members of the CzechSociety of Lymphology that, for the occasion, combined the programs with an uninterrupted service of simultaneous translation (more than 400 participants). The next meeting will be held in May 2019, in Brussels, organized by the Belgian colleague Pierre Bourgeois. 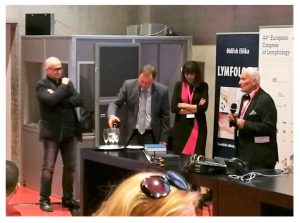