The Theoretical-Practical Course on ‘Rehabilitation of Phlebolymphoedemas’, organized in Cosenza by Provider Geco Formazione, has just ended. The lecturers were Dr. Sandro Michelini, current National President of ITALF (Italian Lymphoedema Framework) and past-president of the European Society of Lymphology and of the International Society of Lymphology, and Fabio Romaldini, a physiotherapist expert in lymphological rehabilitation who works in Michelini’s TEAM. 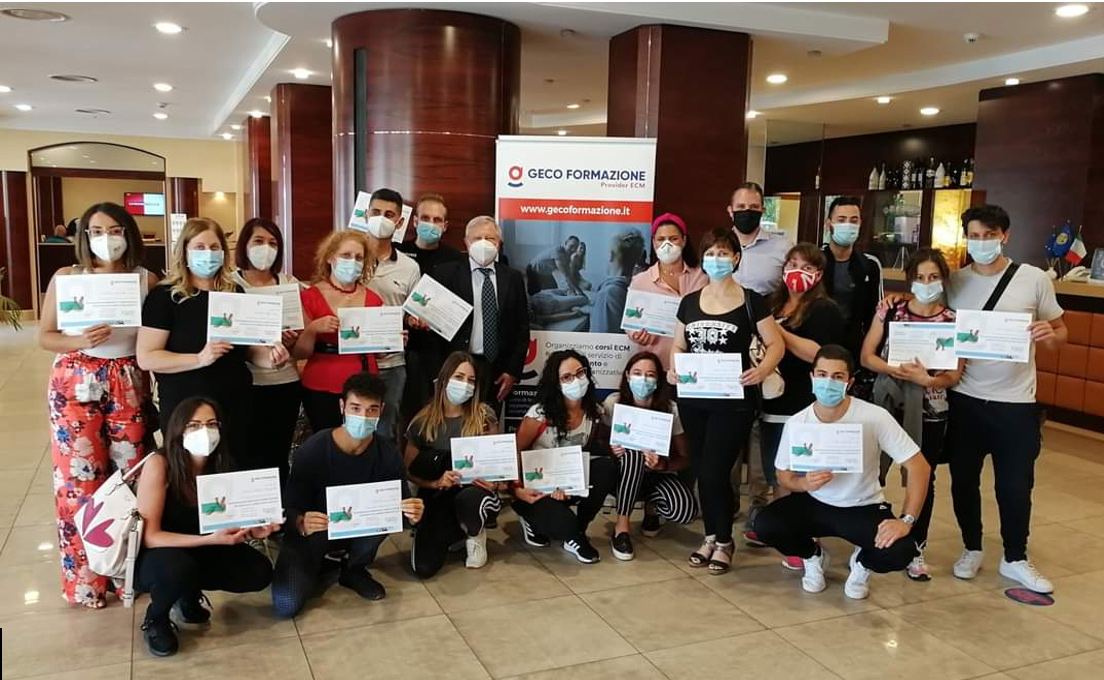 The Course aimed to train, from a theoretical and practical point of view, personnel working in Rehabilitation in the Calabrian and extra-regional territory, with particular reference to venous and lymphatic pathologies.

Many aspects of the pathologies under consideration were presented and, in particular, the diagnostic-therapeutic approach to care was described according to the guidelines of the major international societies in the field and those of the Ministry of Health sanctioned in a special document signed on September 15, 2016 by the State-Regions Conference. The same document hopes that scientific associations (including ITALF itself explicitly mentioned in the text) will actively intervene in the training of the operators themselves

In addition to the necessary anatomical reminder of venous and lymphatic pathophysiology, the topics covered also included epidemiological aspects (WHO estimates that there are approximately 300 million cases of lymphedema worldwide, 150 of which are primary forms, based on genetics, and 150 secondary forms, which are surely constantly growing, mainly due to treated oncological pathologies), clinical diagnosis, instrumental tests, and commonly adopted medical, physical, and surgical therapy protocols. For physical rehabilitation therapy, reference was made to all known manual and mechanical drainage and decongestive techniques, including manual lymphatic drainage, manual venous drainage, elastocompressive bandaging, and muscle exercises aimed at activating, mainly, the “muscle pumps” of the limbs, the true peripheral engine that promotes the return of fluids from the peripheral areas of the body to the central ones.

We then made an excursus on the main causes of edema of the limbs also identifying the systemic causes (cardiac, hepatic, renal, thyroid failure, and edema from pharmacological intolerance – cortisone and antihypertensive calcium channel blockers and sartanics). Among the causes of edema of the limbs (both lower and upper), reference has also been made to Lipedema, a pathology often confused with Lymphedema but which has a completely different genesis and a therapeutic approach substantially different from that adopted for Lymphedema. Dr. Michelini’s team has recently identified the first mutated gene responsible for Lipedema discovered worldwide; this news has been reported by important scientific journals and by the press because, moreover, for the first time the commonplace that women affected by the disease are victims of inconsistencies in dietary regimens or, even worse, susceptible to bariatric therapy (with further anatomical and functional damage that they have to suffer in these cases) has been ‘debunked’.

With an examination of some complex clinical cases, considering the various diagnostic and therapeutic steps shared with the participants in the Course, the Professional Refresher Course was concluded amidst the enthusiasm of the participants who proposed to become as many qualified reference principals for the many regional patients affected by these pathologies.

Appointment for a similar initiative with the same organizers for the spring of 2021, with the hope that the contingency ‘COVID19’ is finally dispelled.