After a painful preparation and in doubt about the feasibility until the beginning of the summer, the 28th Congress of the International Society of Lymphology was held in Athens. The overall participation was important (more than 400 people) but more than three quarters of the congressmen, in spite of the rigid anti-contact rules strictly observed during the whole course of the works, were connected ‘remotely’ following the whole course of the works.

The particular technical-organizational difficulty was brilliantly overcome by a staff of technicians who managed to harmonize all the connections really reducing to a minimum the ‘downtime’ and allowing in many cases a complete discussion in presence and at a distance.

The Opening Ceremony opened with a presentation by Ethel Foldi dedicated to her recently deceased husband. Speaking of Michael, of his professional and scientific commitment and of their lives, with an atmosphere of general emotion’, she recalled the many important contributions brought by the researcher in the field of lymphology, not neglecting the intense didactic work of preparation of personnel, protracted for decades always with the same commitment.

But an entire session of the conference was dedicated to another colleague recently deceased who was always present with a massive series of scientific presentations, the result of an activity carried out at the international level with the great experience that had always distinguished him, as well as with his natural gentility; this is the case of Waldemar Olszewski, whose partner Mariana Zaleska presented some works recently completed under his supervision 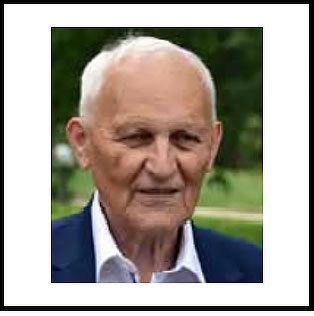 Finally, another illustrious lymphologist who left us a few months ago was Oldrich Eliska, an expert in lymphatic anatomy and a great clinician remembered by his favorite student Martin Wald, who was also remotely connected, like Ethel Foldi. Eliska invented from nothing the Czech Society of Lymphology, reaching in a very short time a number of members of over 400, all very passionate about the subject, leaving in this way a scientific community very motivated and directed towards clinical and experimental research.

The session on the role of Genetics in our era was opened by a prologue (which also accompanied the opening of other sessions) of the Greek colleague Ioannis Grammatikakis who dwelt on some aspects of the History of Medicine in ancient Greece, from Aesculapius to Hippocrates, passing through a series of other illustrious figures of that period who operated both in the Greek territory and in the colonies (especially Italian) of Magna Graecia. In one of the moderations of the writer (busy every day of the congress also from this point of view due to the physical absence of many figures in charge of the moderations themselves) I commented to the speaker that if being colonies means having been able to enjoy the transmission of these cultural and professional experiences, it was an honor to be considered colonies. 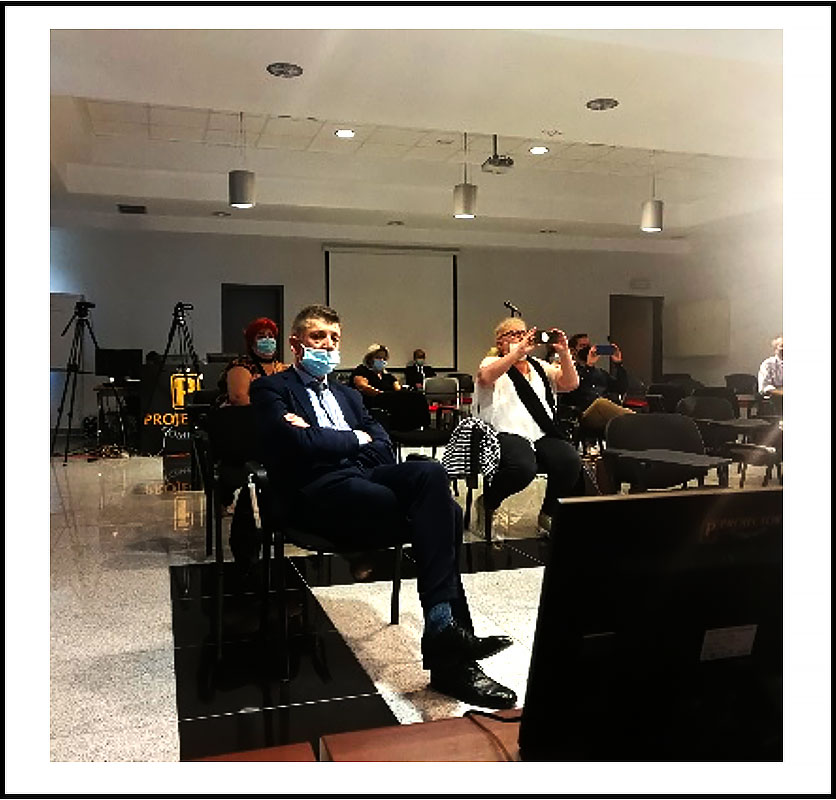 Belgian geneticist Vikkula presented several syndromic pictures, especially of young patients, recommending a careful study of clinical aspects and pedigree of the patient, fundamental for any basic genetic study. Isabelle Queré also described some familial forms (especially S. of Meige and Milroy), with a basically more “benign” course. The writer then presented some new family pictures of genes considered natural candidates, if mutated, to the onset of primary lymphedema. These include: TIE1, RORC, NRP1, NRP2, NOTCH1, PECAM1 AND SVEP1, some of which are also implicated in the genesis of autoimmune diseases. 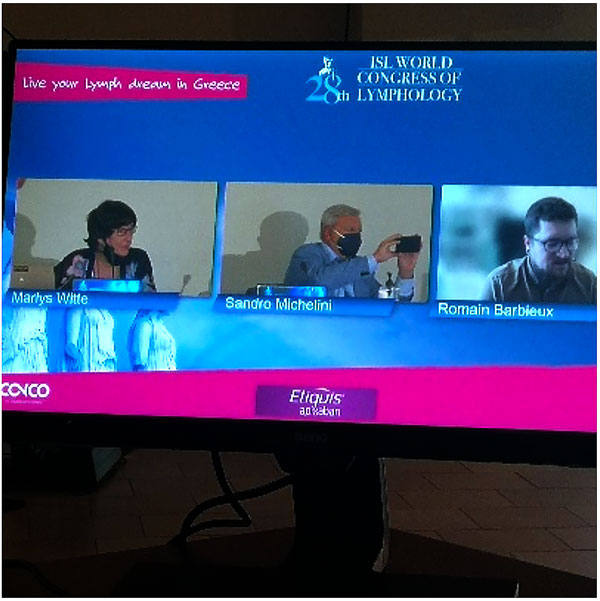 Sessions on Physiology and Pathophysiology of the Lymphatic System, on Diagnosis, Classification and Risk Factors of Lymphatic Diseases, and on Pediatric Aspects were held, where Dimakakos himself (brave President of a Congress at the limits of reality and rightly rewarded by the success of the initiative carried out in conditions of extreme objective difficulty), Pissas, Jane Wigg, Pinar Borman, Martin Wald and Mariana Zaleska, among others, presented particularly interesting physiopathology and clinical aspects. In addition, Roman Barbieux demonstrated the therapeutic effects of lymphatic drainage with dynamic lymphoscintigraphic examination and Rene Haegerling showed the three-dimensional distribution of the lymphatic circulation in normal and pathological subjects, using the Lightsheet imaging system.

There were also sessions dedicated to COVID19 and its consequences on the clinical course of lymphatic diseases and on the problems related to the care, in this period, of patients themselves (as rightly pointed out by Marina Cestari). The surgical sessions were also attended by Pissas, Miguel Amore, who emphasized several specific anatomical aspects, Peter Neligan, Corrado Campisi and Hakan Brorson, Francesco Boccardo, Rudiger Baumeister, Corinne Becker, who reiterated their respective points of view and different approaches to patients with primary or secondary lymphedema.

The session on Lipedema was also very well attended, where the different points of view emerged in their radicality. Isabel Forner Cordero, Corradino Campisi and the writer (who had the opportunity to exchange personally with Bertsch and Christine Moffat, in a long discussion, the different experiences emerged from each of us) replied with their point of view to the guidelines presented by a group of colleagues, mainly European, who simply adhered to what was drawn up by the German school of Bertsch (Foldi Clinic). In particular Bertsch affirmed that the term Lipedema is wrong because by edema we mean an accumulation of interstitial fluids that in Lipedema there is not. The writer then recalled that the term edema derives etymologically from the greek and means “swelling”; in clinical practice then, erroneously, it has been automatically attributed only to the stagnation of tissue fluids. In reality, we speak of swelling, regardless of whether this is caused by abnormal accumulation of fluids or cells. Apart from the discovery made by our Italian group last year of the first gene responsible for the pathology, the writer has also pointed out that in his case history (in the process of publication) there is also a fair number of “underweight” patients, prone to anorexia precisely because of the fear that by ingesting calories, the areas affected by the disease may worsen in their conformation. On the other hand, the same mutated enzyme found to be responsible, if changed, for the phenotypic picture is involved in the metabolism of progesterone and of one of its catabolites, Pregnanolone, which exerts an inhibiting action on the ‘GABA channels’ of pain. At the end of the discussion Campisi proposed to draw up an official Consensus Document of the Scientific Society to resolve these issues. The author limited himself to saying that he had already proposed it two years ago at the Buenos Aires Congress and those present recalled him urging the drafting of the document itself on which they have been working for some time. Parallel to the Congress, a series of speeches dedicated to a Course on “Conservative Treatment of Lymphedema: ‘from theory to practice'” was also held, involving numerous speakers including Marlys Witte, Michael Bernas, Isabel Forner Cordero, Pinar Borman and Gianni Moneta, who, in particular, addressed the problem of genital edema.

There were also moments of extra-congressional meetings, an opportunity, finally, to exchange opinions and ideas in person and not as done for a long time through the means of communication ‘on-line’.

At the Gala Dinner the awards were given to the best papers presented, especially by young people who presented interesting studies of instrumental and clinical diagnostics (in particular on Noonan syndrome).

On Friday, as per tradition, there was the exchange of greetings between the Past President (Andrej Szuba), the new President (Miguel Amore) and the Elect President (Evangelos Dimakakos). 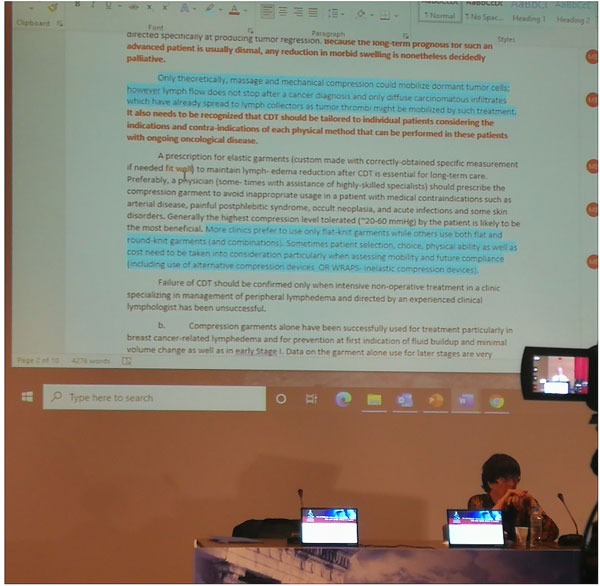 The Assembly elected the new Executive Committee (where the writer was confirmed for the sixth consecutive two-year period, temporarily remaining the only Italian in the body). The updating of the Society’s Consensus Document was also discussed, and this time, at the suggestion of the undersigned, the concept that complex physical decongestive treatment can also be administered to patients with secondary lymphedema and ongoing oncological disease was officially included, The principle has been passed (also supported by a work presented during the Congress by the undersigned, which clearly showed that there was no difference in the evolution of the disease in treated and untreated patients) that the progression of cancer does not depend on ‘mechanical’ or ‘hydraulic’ factors, but on the delicate biological balance that exists between the biological aggressiveness of the tumor and the defensive immunological capacity of the organism that hosts it.

Finally, it is worth mentioning the great economic and organizational commitment of the companies for the realization of the event. In particular, Cizetamedicali, the most important sponsor of the event, has also been the protagonist of an interesting workshop in which the clinical efficacy of Linforoll (operator-dependent instrument for lymphatic drainage under computer control) and of silicone bandages in the packaging of containment bandages has been demonstrated.

Thanks and congratulations to Evangelos Dimakakos, defined by Marlys Witte as a ‘new Odysseus’ for his tenacity in overcoming all the difficulties encountered in this long and difficult period that we are leaving behind.

It has been a very happy occasion to meet again, reconcile and greet each other in person: something that we missed so much after this terrible experience of the Pandemic.

Appointment now to Genoa (September 2023) for the 29th ISL Congress with Corrado Campisi as President.