Lipedema: affects women and causes fat accumulation but is not obesity 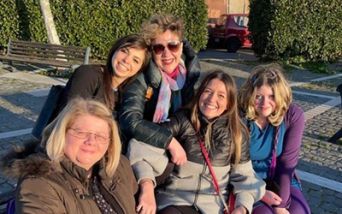 The disease is often considered a problem of nutrition or a trivial blemish, but a recent Italian study has shown the existence of a genetic predisposition. Fighting for the rights of patients is the association Lipedema Italy Onlus.

Annalisa, Valeria and Alessia met on a Facebook group dedicated to lipedema, a disease first identified around the 1940s but recognized by the World Health Organization only three years ago and, above all, still mostly unknown to doctors and patients and often confused with other diseases, including lymphedema, obesity or even cellulite. “Specifically, lipedema is a chronic condition characterized by a progressive increase in adipose tissue in certain body districts, such as the thighs, legs, hips, arms and abdomen; it affects almost exclusively women, generally in conjunction with puberty, pregnancy and menopause,” clarifies Alessandra Lisini, head of institutional communication for LIO – Lipedema Italia Onlus, the association born in 2018 from the comparison, first virtual and then real, between women who had had to struggle for a long time before reaching the goal of a diagnosis.

“Unlike what happens with obesity or common cellulite, the fat that accumulates in lipedema is altered and does not respond to dietary regimens or increased physical activity, often has a nodular appearance and is often accompanied by edema and pain,” Alessandra clarifies. Above all, patients often have to cope with the sense of loneliness and discomfort that comes over a person when they do not feel their health problem recognized even by the clinicians they consult throughout their lives. It is not uncommon, in fact, that the first to misunderstand are family doctors who, “when faced with a young patient, attribute the pain and symptoms caused by lipedema to growth, or treat them as purely aesthetic fads,” continues the LIO representative. “And so, in the case of normal weight or even underweight patients, the problem is downplayed, while in the case of overweight patients the only possible medicine becomes diet. The latter creates great frustration, because when you manage to lose weight, the disproportion between the different areas of the body becomes even more evident. If physicians, whether general practitioners or specialists, would recognize the symptoms of lipedema, they could at least intervene earlier with conservative therapies”.

Still little is known about the causes of the disease but, fortunately, at the end of last August, the International Journal of Molecular Sciences published a study, almost all Italian, on the first mutated gene identified in a specific family nucleus affected by primary non-syndromic lipedema. The discovery, conducted by the research team of Professor Sandro Michelini, of the San Giuseppe Hospital in Marino – ASL Roma 6, former president of the European Society of Lymphology and currently president of ITALF, and Dr. Matteo Bertelli, president of MAGI Euregio, identified the mutated gene AKR1C1 as the responsible for the disease. “This is a first gene but I am convinced that, as with lymphedema, there must also be others at the base of lipedema: we are only at the beginning of a path,” Prof. Michelini explains to OMaR. “In the course of the study, we found the AKR1C1 gene mutated in three subjects of the same family, i.e. the only ones affected by the disease. This gene is important because it encodes for an enzyme involved in the metabolism – in particular in the catabolism, i.e. degradation – of progesterone, which has a stimulating effect in the replication of fat cells. The involvement of progesterone metabolism could also explain the occurrence of lipedema almost exclusively among women. We imagine, however, a sum of genetic phenomena, because hardly a single mutated gene is able to cause this disease. In short, the mutation identified can not explain the problem in full, that is, we are not yet able to say exactly why the disease occurs only in some areas of the body, always sparing the feet and hands.

The genetic aspects are then associated with the so-called functional aspects. “We are simultaneously conducting studies on RNA that may lead to identify a marker of the disease, helping us to reach the diagnostic confirmation,” Michelini points out. “The problem, in fact, is exactly this: either lipedema is not recognized as such or, on the contrary, we are witnessing an abuse of diagnosis. So, if in addition to the genes responsible for the disease we will be able to identify a functional marker, we will be able to have an easier diagnostic confirmation in doubtful cases”. In any case, the discovery of the AKR1C1 gene represents a very important step forward in understanding lipedema. “Almost always the causes of the disease were traced back to eating disorders, so women who suffered from it were often subjected to bariatric surgery, used for obesity, reporting further damage on the damage already in place,” stresses Prof. Michelini. “In this way, we clearly demonstrated the genetic predisposition to fat deposition in certain body districts. This was also a liberation for women who, besides being ill, were also blamed”.

In the meantime, while waiting for new and more promising therapies, the LIO Association continues its battle of information and awareness, intensified more than ever during the month of June, dedicated to lipedema. One of the main activities of the Association consists in supporting and directing patients towards the best treatments currently available and the most appropriate specialists, giving them access to the most advanced therapies, aimed at limiting symptoms and improving quality of life: complex decongestive therapy, physical interventions based on radial shock waves and radiofrequency, and surgical treatment that, through liposuction with lymph-sparing techniques, acts on large volumes of fat. Among the objectives of the LIO is also to obtain the inclusion of lipedema in the Essential Levels of Care (LEA), so that the disease is linked to a special exemption code that guarantees patients free health care and compression garments. Hence also the request to Orphanet to keep lipedema in the list of rare diseases until we have certain epidemiological data.

Finally, in June, LIO launched a fundraiser to finance a three-year study that will involve, among others, prof. Sandro Michelini and prof. Saverio Cinti, Scientific Director of the Obesity Center at the Faculty of Medicine and Surgery of the Polytechnic University of Marche: it is, more precisely, a morphological and molecular investigation that will focus on the hormonal involvement and angiogenetic mechanisms potentially linked to the development of fat cells and the onset of pain in lipedema, with the aim and hope of improving the methods of diagnosis and paving the way for specific and effective therapies.